This is about some new stuff you should think about before you take the plunge - into living together in marriage.

If you are the romantic sort and/or are madly in love so that nothing seems problematic and everything seems achievable, you will be making decisions as if that is how it will always be. Good on you, and I hope it works out. But read on anyway, even when you have decided this doesn’t apply to you.

If you approach life from the other end of the spectrum, with an eye to the future and a healthy dose of realism, this is definitely for you: a recent development in the law on how property will be divided upon separation that might blow you away.

We should all know (after all, it has been that way since 1976) that the law recognises as socially important, an approach to property owned and/or used by relationship partners that can treat the property as jointly owned.

The Court explained that once the shares in relationship property have been sorted out, section 15 (of the statute containing the law of relationship property) should, if the parties have separated, be used to compensate the stay-at-home partner from the got-ahead-with-their-career partner’s half share. Calculating the compensation is complicated. But you need to know that the Supreme Court said if it was necessary to achieve fairness for the stay-at-home partner’s lower earning power, they can be awarded compensation – as much as the whole of the other partner’s share.

For those of you who think about the unexpected consequences of embarking on a relationship beforehand, those of you who feel “burnt” by the aftermath of a previous relationship, maybe bitter, unwilling to share what you own, even with a new partner, and might want a prenuptial agreement – think about this. Not only will your relationship property (and in some circumstances your separate property) at the end of a relationship be treated to a division in halves, but also, if you are going to expect your beloved to raise your children, know that they can claim compensation for their lack of earning power after separation (and your increased earning power) from your half. And, it is worth repeating, it can be as much as all of your half. And if you are the one is going to stay home, give your partner all of the support in their career that you can because they will have to compensate you.

What to make of this? Don’t limit your life, or enter a Monastery. Go for the joys of that relationship but:

First, know about it.

Second, if what you’re embarking on is the creation of a family, accept that if you go onwards and upwards with your career and your partner goes backwards in theirs because they are the one who stays at home with the children, they have a stake in your increased earning power. Should you later separate, while you can carry on with your career and (subject to Child Support of course) enjoy your fat salary, they can claim and will get part of your capital while they get back on their feet.

Or you could go the “prenup” way and contract to exclude the law so that before your beloved accepts you as a partner, they know that you will only enter a relationship if at the end of it, you can take your full earning power and if they’ve stunted theirs by caring for your children, tough, they can’t have compensation.

Good luck with that.

Stuart Henderson is a founding partner of Henderson Reeves. He leads the firm’s dispute resolution team, and has over 40 years’ experience.

There are four legal documents that I see as essential to most people’s lives. They are: A Will; Enduring Powers of attorney; Family trust; and Relationship property agreements. 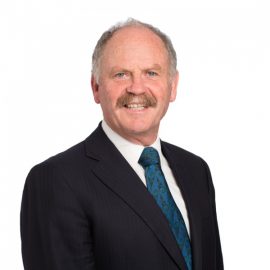